Top Tips For Getting Innovative In Other Cultures - Trust The Process 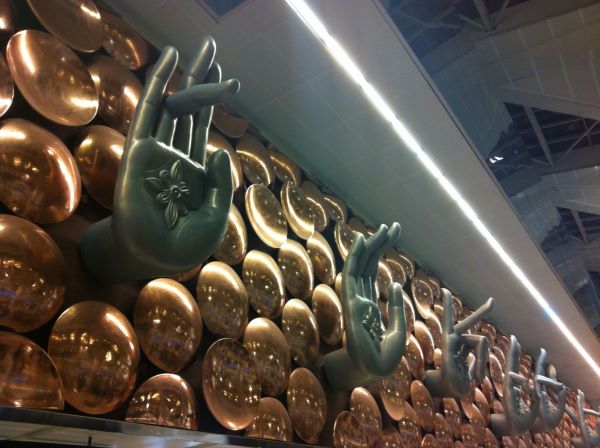 I would like to conclude the series I’ve been writing on top tips for leading creative and innovation sessions in other cultures with this final thought. But before that, to recap, the first installment was about the importance of taking the time to familiarize yourself with the culture you are in. The second installment was centered on how to use humility to your advantage when working with people in cultures different from your own. Both topics involved recognizing that you are a stranger in a strange land and how that, by itself, can dictate how you approach a session. At first glance, these two tips might seem in contrast with what I write today which is trusting your instincts with the process, creative behaviors, tools and techniques that you employ.  This may sound steadfast and uncompromising, however, this isn’t an either-or situation. It’s a not a question of familiarizing yourself with the culture, being humble or trusting your instincts.  Rather, it’s a case of “and,” as a leader of any creative or innovation session, you will want to be familiar with the culture you are in, humble in your respect of it and trusting of your instincts when it comes to delivering a top session.

As I’ve mentioned previously, every culture is different. Some are more willing and open to express their thoughts and ideas, others are much more reserved.  That aside, fundamentally, people are the same. They have the same hopes, dreams and fears; they simply express them differently in the language of their culture.  As a leader, your job is to the open the door to different perspectives, insights and inspiration that will allow them to entertain new thinking and ideas. Sometimes when the door opens teams will rush through, sometimes they are much more reluctant to enter, a reflection of the culture of expectations that surrounds them. It’s the latter that will really test your mettle as a leader, but one where trusting the process is paramount.

Creativity and innovation in business is a funny little animal. Once you land and align on the question you are trying to solve for, and when you strip away the jargon, tools and techniques, it comes down to two distinct phases, one that is expansionist and one that is reductionist.

The expansionist is where you take off and soar to embrace all possibilities whether good, bad or ugly. This is when you may hear the creative practitioner say things like “don’t judge” or “there are no bad ideas.” The truth is there are a whole lot more bad ideas than good ones.

This is about landing by making smart, informed decisions as to which ideas to move forward with.

Business people, by their nature, are pretty good at making decisions and landing, after all, it’s how so many business people are evaluated. Business people are not always as good at flying in the proverbial cloud of expansionist thoughts and ideas. This is where fear and anxiety can grip not only the participants, but even the leader. At this point, there are many loose ends, unconnected insights and half-baked ideas. Creativity and innovation are not neat, linear and before the light appears at the end of the tunnel, there will be plenty of turbulence and chaos. Simply being aware of this can help you keep calm and avoid panicking, because the risk is to give in to chaos and play it safe, or worse, lose the group.

Honestly, I don’t believe there has ever been a project that I’ve led where, at some point, the thought hasn’t crossed my mind that the whole thing would go teetering off the rails and off a cliff; and I’ve led hundreds of projects. This is normal and I would say even healthy because it means that you are pushing the team out of its comfort zone, and that is what innovation is all about, it’s what we do at The Green Room Collective. We continue to challenge the status quo. However, this is where you must trust your process.

Here are surefire ways to trust your process:

3) Understand the concepts of divergent and convergent thinking

Bonus: It also helps in the beginning of the session to ask the assembled team to embrace ambiguity and be okay not knowing where things will go. We also reassure the team that we know where it needs to go and how to get there.

Early on in my career, I was reminded of this when working in India. A group of us from the corporate office had flown there to work on four separate briefs simultaneously. The leaders of each of the four sessions had all been trained in the approach but were also of varying levels of experience. We only had two days, and my role was to roam between groups to ensure we were staying on track. The participants from the Indian offices had never done anything like this before, and it wasn’t hard to tell that they felt uncomfortable. Each of the four teams had its own room. As I made my rounds through the first three teams, I could tell it was going to be a rough go. It was evident that our hosts were much more comfortable in never-ending debates rather than expansionist thought. Don’t get me wrong, I love a good debate, and there is a time and place for it in innovation work, but when you are trying to move fast and cover a lot of ground quickly, debate is a momentum killer.

We did our best to get back on track, and as I was leaving the third room I heard a roar of laughter coming from the fourth group. Eager to find out what was happening, I made my way to their room. Upon entering, I saw our team lead sitting cross-legged on the floor with his team in a circle, all crossed-legged and on the floor. All of the chairs and tables had been pushed to the side and on the walls were a cornucopia of colorful post-it notes of all there insights. The insights had been grouped and above the post-it’s where well-expressed themes that captured the essence of the insights, and that could be later used as springboards for ideas  I wasn’t too surprised because out of all the team leads, this one was the most experienced and had in the past done this professionally. During the break I asked him how it was going and told him about how the other teams were having a bit of a tough go. He told me that in the beginning there seemed to be a lot of confusion as to what was happening and why, so he decided to go back to the process, because it works. He then explained that he told the team of the approach they would take – first they would gather all the insights on the wall, then look for themes in them, and then use the themes to generate ideas. After signaling to the team the approach they would use, he then asked if they were up for it. They all bought in. He trusted the process. In the end, each of the teams persevered and this resulted in great new perspectives, insight and ideas.

Leading teams in innovation can be scary, especially in far-away lands where everything seems strange and unfamiliar. When all eyes in the room look to you, it’s easy to have creeping doubts and fears when things don’t look clear, but the process is your friend. Trust your experience, trust your instincts and always trust the process.

For more thoughts on creativity and innovation, check out other tips and insightson our blog. And if you have any thoughts, questions or would like to share your own experiences, please don’t hesitate to reach out.